As a social media ambassador for many of our clients and ourselves, I often sense our clients’ hesitation to be on social media platforms except LinkedIn. In our world of industrial and tech companies, the primary marketing tool is promoting products and services, usually through trade media. LinkedIn seems like a natural extension of that.

However, on social media, including LinkedIn, “thought leadership” is what drive long term value by:

Clients’ main objections are that creating social posts and engaging with visitors or followers is too time-consuming and does not produce an immediate return-on-investment. In today’s environment, however, that type of thinking could lead a company to become irrelevant, and ultimately insolvent.

Reluctance to engage in social media generally correlates with age. People 50 and under who grew up using computers and the internet (digital natives) are more willing than individuals over age 50 who started using technology extensively after they began their careers (digital aliens) or have yet to embrace it.

As baby boomers continue to retire and members of the Gen X, millennial and Gen Z demographic groups assume leadership roles in their companies, social media engagement is becoming the rule rather than the exception in B2B companies, just as it has been in B2C companies for the past 10-15 years. That’s because these younger leaders grew having with social media accounts and are comfortable interacting with followers, prospects and customers online, as well as obtaining information that helps them make purchasing decisions.

Additionally, social media enables a company to expand its geographic reach much more economically than traditional marketing strategies and tactics allow. The only cost is time, as opposed to buying space in publications and printing and mailing brochures and catalogs. The internet’s reach is global.
As for clients willing to post only product-related content on social media platforms, I tell them that they are missing an opportunity to create relationships with potential customers. After all, how interesting is it to read about, and view pictures or videos of someone’s products, especially if they don’t have a large or varied inventory?

After a while – a short while in today’s world of diminishing attention spans – people get tired of reading the same type of content about a narrow range of products or services, which means they will stop reading your social posts and will instead gravitate to competitors who have more compelling things to say about the world at-large or about themselves.

The intimacy of social media compared to traditional marketing channels gives potential customers a chance to know you as a specialist in a particular area, but also as a thought leader who reflects upon how his or her industry fits into the “big picture” and who also has interests outside of work, be it outdoor recreation; painting; playing golf, tennis or softball; volunteering in the community; or avidly supporting a professional or college sports team.

As the old saying goes, “All work and no play makes Jack a dull boy.”

As a decision-maker in our company, I’m attracted to social posts related to products and services we need to keep the business functioning. At the same time, I’m looking for valuable information which can benefit the company or myself personally, beyond content which appears on the company’s website – today’s equivalent of a brochure or a Yellow Pages ad before the internet became the world’s primary medium for selling products and services. 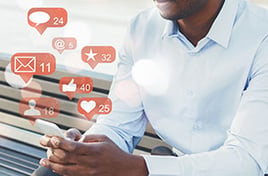 Because the internet is a highly visual medium, it’s important that social posts are accompanied by images that capture viewers’ attention and touch their hearts. That emotional connection makes a viewer want to read the post, and most importantly, click on the link to see additional content, be it curated or original, strengthening the “bond” between the person viewing the social post and the company which created the post. Such a connection is likely to help form a business relationship, or it can lead to referrals.

In contrast, if the post is poorly written, or if the image is uninspiring, or there is no image accompanying the post, I am unlikely to further engage with the company and will instead look at what competitors are posting to their social media platforms.

If it appears as if I’m asking a lot of companies from which I may someday purchase a product or service, I am, but that’s the way business is being done.

Increased use of social media in B2B marketing and sales is similar to situations in which businesses are forced to modify their operations because of new laws or regulations taking effect. Making the transition can be difficult, but eventually the new way of doing things becomes second nature and people forget how things were done previously.

Using another example, before computers became standard office equipment, documents were created on manual typewriters and copies were made by putting sheets of carbon paper between sheets of typing paper. People adjusted to the new tool at their disposal and relegated their typewriters to the trash (recycling was practically unheard of 40 years ago) or to museums.

To sum up, B2B companies that don’t deal directly with end users need to start using social media as B2C companies have been doing for a decade or more. To avoid creating a social media presence, or to use it strictly for product promotion, is a risky strategy in today’s environment. That’s because decision-makers want to know that the companies they do business with are made up of thoughtful people who know the industry and have “personality.”

In my experience, clients have the knowledge and breadth of outside interests to provide engaging social media content. They can become effective participants in social media with a change of mindset which includes thinking beyond conventional marketing boundaries by understanding that they are selling themselves in addition to their products, as well as responding to people’s comments in a timely manner.

What have some of your best social media experiences been? What have you learned from any discouraging experiences?

Among manufacturers these days, there’s debate about whether ...

Traditionally, marketing has been a process that’s largely creative and intuitive. There’s still plenty of room...